The Characteristics of the Rhodesian Ridgeback 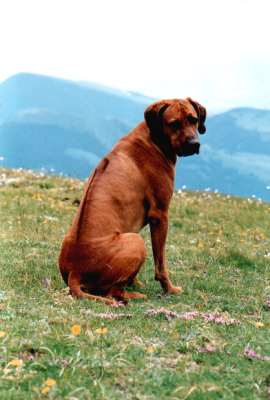 The Rhodesian Ridgeback is a slow maturing dog. They’re fully developed, both physically and mentally, at the age of between two to three years, but they’re able to learn lasts for a time much longer than that.

When raising the puppy, affection and a lot of love is the supreme law. You have to be willing to accept this dog as your partner. You will then be amazed as to what abilities this dog is capable of. He seems to have a sixth sense of danger.

A training under conventional methods, especially under duress, carries the risk that the dog will completely deny any performance. He never bites people! The RR shows his best performance not only as love to his master, but as well as by hunting. He doesn’t poach or go “hunting on his own.”

The RR is a family dog. In order not to demise, he desperately needs the close connection to the family in order to know whom he belongs to and whom he’s to protect.

In Germany, breeding started in 1973. These Ridgebacks were registered in the DSaZB (German Collective Breeding Registry) at the VDH (German Breeders’ Association) and could already prove a long history of ancestry.

Nowadays, the breed is well widespread and enjoys great popularity.

This breed is being carried out by responsible breeders, who are members of a club, i.e. the DZRR (German Breeders’ Association Rhodesian Ridgeback). They have joined together keenly to preserve the originality of this valuable dog, and thus to give mankind a wonderful comrade.