The Breed-Conformation-Test (ZZP)is a special exam to approve Rhodesian Ridgebacks for breeding within the DZRR. The exam consists of various behavioral tests, which are based on the “Lower-Saxon Behavior-Exam”, and to ensure the conformity of the breed.

Nowadays, the criterion “behavioral tests" has become an indispensable portion of the examination. This is particularly important since the RR was once already on the Federal Republic’s list of dangerous dogs. Currently, the Federal States and the animal welfare law make certain demands on the breeding and boarding of large dogs. Through the behavioral exam, which uses different test situations, it can be ensured as far as possible and required, that only behavior-safe, environment-safe, socially acceptable and mentally resilient dogs are bred. Threatening and unnatural test situations are deliberately avoided in these behavioral tests.

”Verification of compliance to the standard” ensures that the nature and form of the RR are held in accordance with the FCI Standard No. 146. The form compliance must be decided by a VDH (German Breeders Association) breed-judge, who is approved for Rhodesian Ridgebacks. The behavioral test is adapted to the current standard of cynology. The behavioral test is performed by the same VDH judge, who is suitably qualified in accordance with the criteria prescribed by the Board.

By registering for the ZZP, the test participant agrees to the conditions of the said exam. Formal complaints regarding the execution of the ZZP can only be submitted in writing to the Examination Board on the day of the examination. Passing the deadline is considered as a waiver of the right to complain. The examination results can be critically and objectively discussed with the breed-judge on the day of the examination. After that, an appeal is no longer possible and the exam result is final.

Requirements for the Examiner

To be able to make an assessment in a behavioral test, the examiner should be qualified in either behavioral science or in interpretation of dog's expressive behavior. The qualification should be certified from the VDH or a VDH approved club. The behavioral test is performed by a single VDH breed-judge. According to the statutes, associates should be up-to-date on the current cynological standards. The board recommends the participation in educational courses provided the VDH: cynological behavioral evaluation of breeding animals or similar courses.

The dog owners must have liability insurance for their dogs. The dogs must be in a healthy condition; a valid vaccination certification must be presented.

The presentation of the dogs occurs individually and primarily unleashed. The area is large in accordance to point 3: fenced and unknown to the dog. Each dog is assessed individually. Accordingly, the duration of the individual test depends solely on the particular dog-owner team. The duration of a single potion of test should be a maximum of 5 minutes, but a total of 40 minutes is not to be exceeded.

The males are tested before the bitches. It is important to ensure that no bitch is in heat, neither in the testing area nor its vicinity. Bitches which are in heat are tested at the end of the second day of the tests.

Only collars and leashes which fulfill the safety regulations are to be used to handle the dogs. The collars must be firmly adjustable and durable. They may not cause any pain to the dog. Choke, spiked, or collars with additional buckles are prohibited. It will be checked, that the dogs cannot escape from their collar.

The dog owners are encouraged to handle their dogs on a loose, dangling leash.

Basically, the dog’s appraisal should occur only at the end of each individual portion of the test, ergo he’ll be concentrated on the test situation, thereby depending solely on the voice of his owner. The dog’s sovereignty is observed by the examiner throughout the test. Upon any detection of inappropriate behaviors, i.e. fear or aggressiveness, which cannot be controlled by the owner, the dog will be disqualified by the examiner. The exam is then considered as failed. 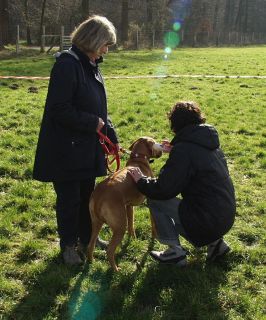 Identification of the dog 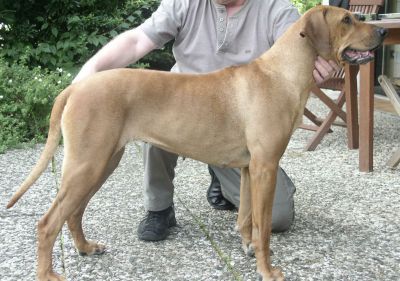 Stance of the dog during measurement

During measurement, the dog stands in a natural state on a level surface. It is important to ensure that neither an "artificial angle" in the knee and hock nor in the withers is brought about by the handler (exhibition pose). The dog stands with his head up, the larynx should be at a level in line with the back (see J. Eberhardt, The RR). Preferably, the back should be straight so long as the natural stature of the dog allows it. It is also important to ensure that the subline of the dog is not touched. It is measured in a known manner from the scapula tips to the ground (= height at the withers). The measurement is done 3 times, then the mean value of the three measurements is used. A measurement tolerance of + / - 0.5 cm (approx. 1/4”) between the individual measured values is acceptable. If the dog moves vigorously during the measuring process, one or two further measurements are permissible

Until further notice, the size regulation of the DZRR is as follows:

Dogs exceeding or falling short of these dimensions are not allowed for breeding. 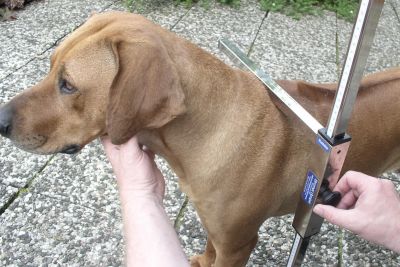 Measuring at the withers 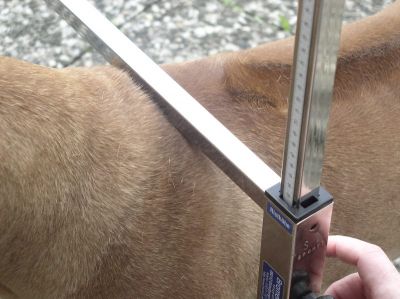 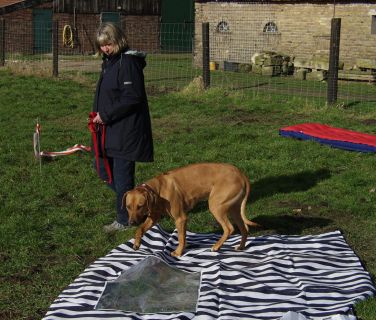 Behavior on the grounds

Willingness to cooperate, compliance, bond to the handler.

The examiner interviews the handler according to the questionnaire.

The dog is not cleared until after the questioning.

The handler then walks with the unleashed dog through the grounds and motivates him to investigate the different environmental stimuli.

Test 3: Playing with the Handler: Testing the Playfulness and Controllability 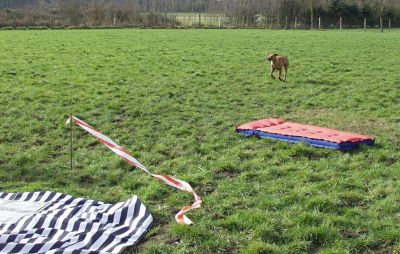 Playing on the grounds

The handler tries to play with the dog in the usual way. At the request of the examiner, the handler then uses the usual commands:

The dog is then leashed. 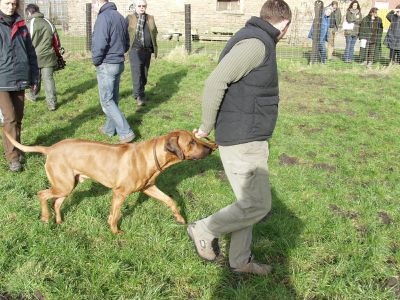 Behavior in a crowd.

Prerequisite: The test assistants must not be known to the dog.

A group of at least six test people and the dog-handler-team approach each other at normal speed. The test assistants are advised not to approach the dog-handler-team in a closed row. In passing the dog, an instructed subject will casually brush his body (an everyday city situation) lightly touching him without any further attention.

A group stops next to the dog and talks. At the request of the examiner, the team goes through the group. 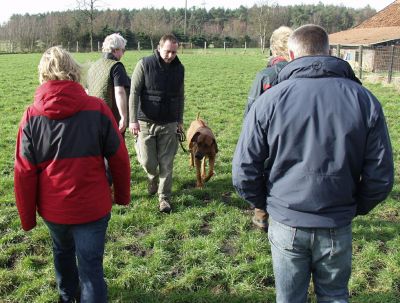 Prerequisite: The test assistants must not be known to the dog.

The group moves and converses while the dog is being led through the group. Afterwards, the handler leaves the group with the dog. A person comes towards them or crosses their path. Just before the test assistant is at the level of the dog, he straightens an umbrella upwards. 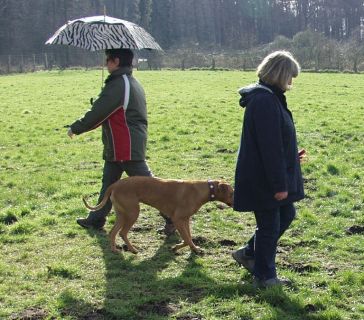 Opening of an umbrella 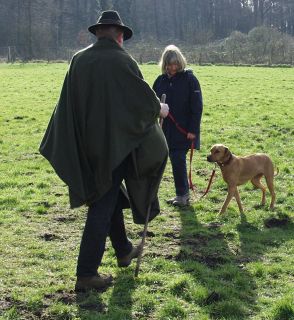 An assistant puts on a long, dark coat and hat. When walking by the dog, the coat should swing loosely. The assistant is required to take an upright posture and not to look at the dog (without staring).

Test 7: Greeting the Handler and Dog 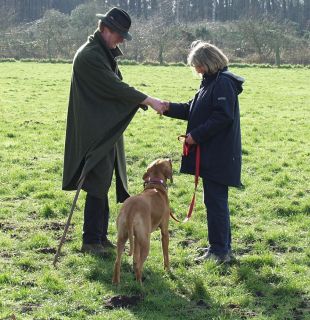 Observing the behavior towards a friendly person with an unusual appearance, which eventually has a lasting impression from test 6; Stress management.

The assistant from the test 6 returns and meets the team again. The assistant greets the handler with a handshake. With a friendly chat and posture, the assistant takes off his coat and hat in the presence of the dog. It is up to the dog whether or not he wants to approach the assistant or his items. 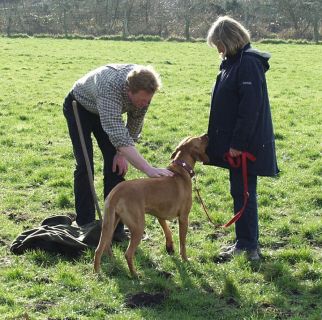 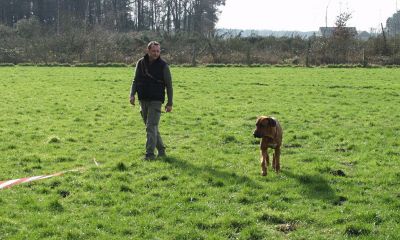 The handler is with his leashed dog on the examination grounds. Acting on the examiner’s instructions, he unleashes the dog in the middle of the grounds. While the dog is exploring the place or the handler is away from his dog, the examiner gives a signal to the shooter, whom the dog can’t see, whereupon the first shot is fired. The distance to the shooter is between 20 and 30 m (20 – 30 yards). During the gunshot test, the dog is neither talked to nor called by the handler. Care must be taken to ensure that the shooter is not visible to the dog and that the sound source is not directed windward to the dog. The gunshot test is carried out with a signal-gun using a 9 mm caliber blank. About 20 - 30 seconds later, the second shot is fired. The second shot is omitted, if a flight tendency was already observed after the first shot. Approximately 30 seconds after the second shot, the examiner tells the handler to call his dog and leash him. The test is over now. 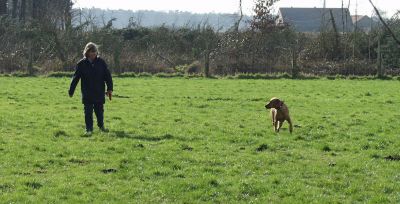 No influence on the dog

Test 1 - Test 8 examines the behavior for anxiety and aggression. Another criterion for breeding is conformity to the standard.

A dog has passed this part of the breed qualification test, if the VDH breed-judge has approval for this breed and is certified with the F.C.I. Standard No. 146.

For breeding, the DZRR allows only the dogs that have successfully passed the behavior test and the form assessment. This does not affect other requirements [for example: findings of HD (hip dysplasia), ED (elbow dysplasia), OCD (Osteochondrosis dissecans), kennel protection etc.] in accordance to the breeder regulations of the DZRR.

The handler leads his dog in a light trot on the preferred side (either right or left). The handler runs the geometric shape of a triangle with a side length of at least 20 m (20 yards). It is at the discretion of the breed-judge to let the dog run the course a second time, either in a diagonal or in a circle, to observe the stride again.

Mrs. Edith Seibert, Mrs. Claudia Cruse and Mrs. Claudia Dost of the committee mandated by the general assembly revised the procedure of the breed-conformity-test (ZZP). This was led under the supervision of VDH judge Mr. M. Klopsch. On the 17th of February 2007, a trail breed-evaluation-test (ZZP) was performed, where the VDH breed-judges Mrs. P. Stracke, Mrs. K. van Klaveren and Mr. B. Seibel attended by invitation. In April 2007, the procedure of the test (ZZP) was presented to and accepted by the general assembly.

In March 2008, the first revised form of the ZZP took place. Lessons were learned from the praxis, i.e. to do the measuring together with the identification at the beginning This was brought to the attention as revision 12 at the general assembly in 2010 for a procedure of change.